Society Games & what they are all about

Members of the Hamilton Swiss Club started the ball rolling in 1964 with the Society Shooting Competition. Arthur Müller the Rifle Master in 1969 introduced the Society Games, as they are known today. The competition includes 50m Shooting, Kegeln, Steinstossen and Jassen. 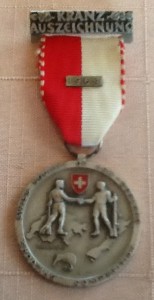 In the first year in 1969 the medals had three cantons on it and every year thereafter featured another three cantons until all cantons were used.

To this day, each club holds these annual Society Games and then enters the interclub competition, called the “Cowbell Competition”. This takes place with Taranaki v Wellington and Auckland v Hamilton. The winner of these 2 groups then fight it out in the final at the Society AGM held every year on Queens Birthday Weekend.

We encourage you to take part in these sports games in your club and join us also at the yearly final. It’s a fun and competitive atmosphere and, should your Club reach the final, you get the chance to meet and compete against members from another club.

The Taranaki Swiss Club won the Cowbell competition after a good battle against members of the Hamilton Swiss Club, winning 3 – 1.

Download a PDF copy of the Society Sports Rules